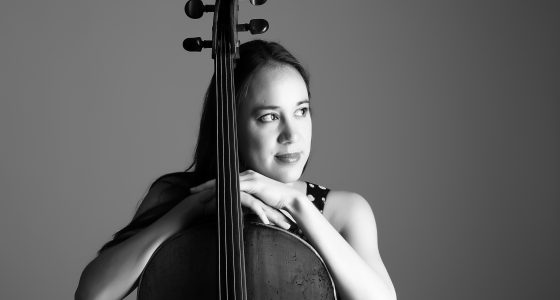 « Joëlle Mauris is a young, talented cellist with whom I have had the pleasure on a number of occasions to work. She is intelligent, industrious, and highly motivated… »

Swiss cellist Joëlle Mauris has wowed audiences and the press on both sides of the Atlantic, including in Canada, Australia, Switzerland, Germany, Austria, Mexico and France. She has been praised for her natural musical instincts and her bursting energy. Joëlle has been granted scholarships and awards from Memorial University of Newfoundland, the  Newfoundland Symphony Orchestra (Suncor Energy String Fellowship), The Glenn Gould School, les Amis du Conservatoire de Neuchâtel, la Fondation Tanner, amongst others.

Ms. Mauris was awarded a degree in cello performance (with Distinction) from the Conservatoire Populaire de Musique in Geneva. She also obtained a M.A. degree in Music Pedagogy at the Haute Ecole de Musique of Geneva under the direction of François Abeille and Denis Severin, an Artist Diploma at the Glenn Gould School in Toronto under the direction of David Hetherington, and a Certificate Stage de perfectionnement at the Conservatoire de Musique in Montréal, studying with Denis Brott. In 2015, Joëlle taught “Lower Strings Techniques” in the School of Music at Memorial University, and she completed a Master of Music Performance and Pedagogy degree, studying with Vernon Regehr. As well, she studied cultural and musical projects management in 2016 and obtained a Certificate of Advanced Studies from the Haute Ecole de Musique of Geneva.

Joëlle Mauris enjoys performing multidisciplinary creations. Her project « Présence » (music, theatre, dance), highlighting the work of composer Bernd Alois Zimmermann, was presented in the Festival Les Jardins Musicaux in 2016 and then given in Théâtre du Galpon in Geneva in May 2017. Her project “Variété”, based on music by Mauricio Kagel, is going to be created in 2019 and will feature musicians and acrobats.

As a member of the cello-piano duo Duo Axus Mundi, she has been broadcasted live on Radio Télévision Suisse Romande. The duo, formed in 2006, recently performed all of Beethoven’s cello sonatas, an exceptional journey of the five important works in one concert.

Interested in contemporary music, Ms. Mauris has premiered solo and chamber works of Canadian composers Sophie Dubois, Adam Scime, William Rowson, and Mark Duggan for the Toronto New Music Festival, the Newfound Festival, and The Banff Centre for the Arts.

She also is interested in folk and French song. Since 2015, she has been collaborating with singer Ludiane Pivoine with whom she has performed in several festivals and concert series. She also plays for songwriters Moran, Marcel Kanche, Circé, Gérald Métroz, Pascal Rinaldi, Cat’s Eye, and Alain Nitchaeff. She recorded the cello voice for the single « Je Fonds » (2017) by Ludiane Pivoine, the recording albums « A Life Among Billions » (2017) by Circé, “Du Nerf” by Lilou (2018), and « Sur un fil » (2018) by Pascal Rinaldi.

Joëlle Mauris was the coordinator of the Swiss Street Arts Federation in 2016-2017, and she directed educational events for the Ensemble Contrechamps (new music ensemble based in Geneva) in 2016-2020.